The 8 members of the 'Nanobots' (Springston Robotics Team) are back from their whirlwind trip to Auckland over the weekend for the National Finals of the FLL (First Lego League) robotics competition, and can pat themselves on the back yet again. 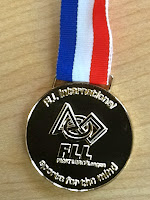 The team was placed 9th out of 20 teams in the Robot Game section, and gained 1st place and another Lego Trophy for their research in the Project section. Each student was also given an FLL Medal.
They represented the school like true ambassadors and Carol was very proud to see how they interacted with others and had exemplary behaviour wherever they went. Well done!
The trip wouldn't have been possible without the support of our parents and wider community, who fundraised to help us get to Auckland. And special thanks must go to our two parents who came and looked after us while we were away - Jill and Tim!

Today we had a Skype call with another FLL team.... from Sudbury, Ontario, in Canada. They wanted to meet us and compare notes about the competition. It was great to meet them and find out how much we had in common. We talked about team roles, our projects, robot design, the team challenge, and which robot missions each team had been able to achieve. We wish them luck for their National Finals on 15 January!

Next week we will be welcoming some students from Freeville School, who are wanting to get started in robotics, and they are coming to see how it all works!
Posted by Madmacnz at 20:52 1 comment:

Click on the image above, to read the newsletter. Double-click to zoom in, click the corner of the page to turn to the next page. Or download as a pdf.
Posted by Madmacnz at 22:12 No comments:

First Lego League (FLL) Robotics - what is it?!

An excellent new video about FLL has been released that will help you understand what the FLL Robotics competition is all about.


Food Factor® Tournament Video: What is FLL® and Core Values

Posted by Madmacnz at 10:58 No comments: 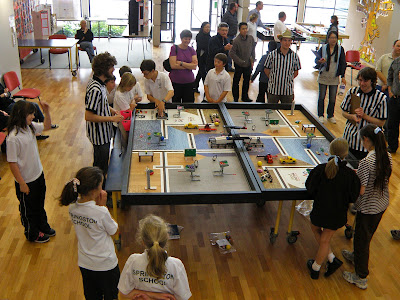 Congratulations to our robotics team, the Nanobots! These 8 students only began robotic programming this year, and entered the FLL (First Lego League) competition for the first time.
The video below shows Nanobots' third and final round of the robot performance challenge. They had scored 100 points in Round 1 of the challenge (the top score for that round). In Round 2 they got 70 points, and were lying in 5th place by the time their final turn came up in the last game of Round 3. How thrilling to then score 127 points! 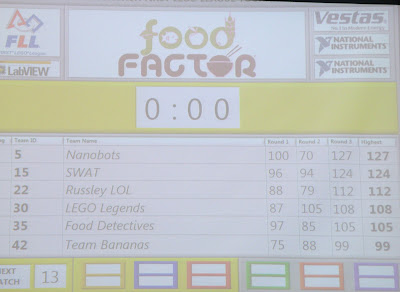 Earlier, they had done an excellent presentation of their project inquiry on an aspect of Food Safety, and taken part in a challenge to see how well they worked together as a team.

The following two videos show the awards ceremony, with the Nanobots receiving the award for Robot Performance. And then, the overall award for the Christchurch competition (all round excellence)!


The team would like to thank the many people who have helped them over the past few weeks of competition preparation:
Posted by Madmacnz at 21:53 4 comments:

Click on the image above, to read the newsletter. Double-click to zoom in, click the corner of the page to turn to the next page. Or download as a pdf.
Posted by Madmacnz at 20:27 No comments:


Today we had another fantastic Springston School Pet Day!

This year our 'A Team' invited students from Christchurch East School, and organised a wonderful day in the country for them. We also hosted a special group of elderly visitors, family, friends and other members of our local community. Several reporters from local newspapers came to see the fun, and some students were even interviewed by CTV. We were SO lucky the weather turned out to be perfectl, with a lot of heartache involved in making the decision to go ahead, at 7 in the morning when it was still raining!

Special thanks to all who made the day such a success: Our judges, the sponsors who supported the A Team in providing lunches and other treats for our Christchurch East guests (more on that in a later newsletter), our generous parents who did baking for the day, the children who all took part and brought along their treasured pets (and the parents who supported them), and all the staff who took on a role for the day under the guidance of our chief organiser of the event - teacher Allana Taylor.

Our Christchurch East guests were absolutely thrilled to be presented with a new Wii to take back to school - the result of generous fundraising by our community. The last photo in the the slideshow below, puts it all in perspective...

We would love your comments (below) of what you enjoyed most about Pet Day this year!
Posted by Madmacnz at 23:39 No comments:

'We Connect' Presentation for Parents

Promote your Page too

Where is Springston School?